Will the oil price keep going up? 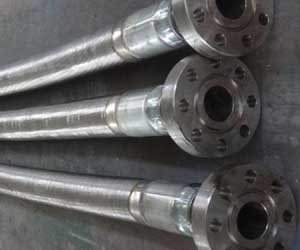 If the oil price keep going up, is going to be a huge demand for the oil spare parts in? We are manufacturer for the production of drilling mud hoses, choke and kill hoses or BOP hoses.

The oil price rally will ensure Aramco is able to meet its $75-billion dividend payout, according to Bank of America.

Bloomberg reports, citing the bank’s analysts, that any doubts there may have been about Aramco’s ability to keep the annual $75-billion payments it promised investors when it listed, have now largely dissipated amid higher oil prices, which will likely boost Aramco’s oil export revenues. Last year, some were worried Aramco would not be able to keep up with the payouts because of the collapse in oil prices.

“Aramco would be well-placed to implement its higher dividend distribution guidance given during the IPO and even increase dividends beyond its minimum $75 billion pledge,” the Bank of America analysts said. “Aramco is one of the few companies globally that can substantially boost output without committing additional capex.”

Interestingly, the report from Bank of America was published before the OPEC+ decision to keep production unchanged was announced on Thursday last week and before an attack on Saudi oil infrastructure this weekend, which additionally boosted oil prices. Saudi Arabia’s own decision to delay the return of 1 million bpd to its output by a month also helped prices on their way up.

Yet, it remains to be seen how willing the biggest oil consumers will be to pay higher prices for oil. The choice could be limited, of course, but China, for one, has stocked up on crude, with its storage space filled up to near limits. India has a lot less storage capacity, but it has been quite vocal about its unhappiness with where oil prices are going, warning that this may hurt its economic recovery from the pandemic.

Yet Bank of America is upbeat about Aramco’s future not just this year but next year as well. The bank’s analysts said the Saudi energy major could even hike its dividend for 2022 as it boosts production and prices remain higher.