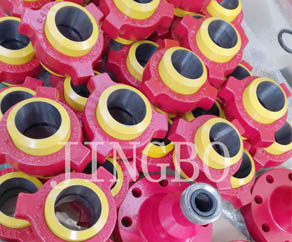 Hammer Unions are designed to enjoin mud tanks without the need of flanged connections.
The union is made up of three parts, two male ends that weld to the ends of pipe and the threaded nut that forms the connection.
The hammer union is designed to connect mud tanks immediately without having to deal with flange connections at all.
If the storage tank is not aligned in the correct way, the necessary hammer union can still be used to ensure an absolutely leak-free seal.
They usually consist of three parts: male, female and nut.

1502 Hammer Union (Blue/Red Sub)
Hammer Unions are designed as heavy duty, high pressure flow line connectors. They are commonly found in chemical plants, on marine dredging vessels, in strip mines and in the oil industry.
The colour coding system on Hammer Unions represent the different configurations and pressure ratings; pressures range from 1,000-15,000 psi depending on the size and configuration.